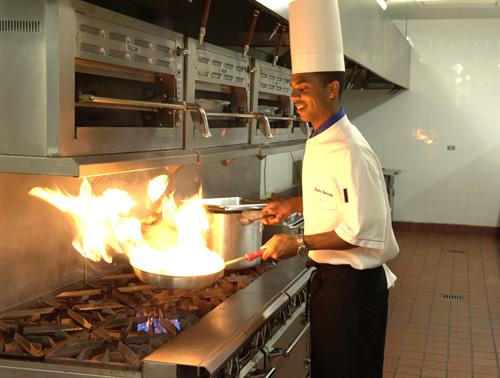 Having prepared extravagant meals for the last three Prime ministers of Jamaica and many other leading foreign dignitaries and celebrities, Chef Randie Anderson comes to this market with distinct culinary mastery. From Jamaica to the Caribbean and USA, the new Chef of the Montego Bay Convention Centre has made a name for himself as Executive Chef with stints at some of the country’s leading Hotels. Known for his unrelenting creativity in the kitchen, Chef Randie arrived at the convention centre this fall as Executive Chef. Most recently he served as Corporate Chef at Rain Forrest Seafood with previous executive chef positions at hotels and restaurants in Jamaica and the Caribbean.

In his new role, Anderson oversees all of the food and beverage operation at the convention centre, including concessions, catering and special events. One of his first tasks in MBCC was a monumental challenge for any chef. Anderson surpassed all expectations when he and his culinary team successfully pulled together the catering by bringing in high quality staff, sourced high end product and quality local produce, implemented all administrative functions, standards and procedures and created a functional working kitchen.

“Right off the bat we put Chef Randie to the test and he passed with flying colors, not an easy task since we have the largest kitchen in the Caribbean with over 15,000 sq. ft. said Dittie Guise, General Manager of the Montego Bay Convention Center. At a young age, Chef Randie found his love of cooking in his mother’s kitchen in South field St. Elizabeth.

He studied at the Art Institute of New York and then continued chef-training in local hotels. His first job was with Nino’s Italian Restaurant in New York City. He earned a degree in culinary arts and Restaurant management and worked for the prestigious Vong fine dining restaurant before leaving the USA.

Once in Jamaica in 2002 he served as Chef for the Super Clubs Resorts. Although his list of accolades is lengthy, a few include 2011 Taste of the Caribbean Gold Medalist; 2009 Epicuran Best Chef cook off Winner; and 2011 Winner of the Lion Fish cook off. He received numerous awards and recognitions from the local press such as the cover of the Professional Cooking 5th Edition, Seafood feature in Panach Magazine, Healthy meal options feature in Wellness Lifestyle Magazine.

Chef Randie brings a unique international culinary expertise to the centre and our discerning clientele,” said Guise. “He was selected as Executive Chef at the Montego bay Convention Centre after several interviews with Sr. Vice Presidents and Food and Beverages Directors from SMG, his glowing references and because of his substantial experience in designing exciting, creative and innovative menus.”

Throughout his 14-year career in leading Hotel chains, Chef Randie has led a variety of fine dining establishments including menus featuring Oriental, French and traditional Caribbean Cuisine. He has cooked for intimate to very large groups – sometimes in the thousands – honoring political dignitaries and Celebrities.