There were plenty of highs at this year’s Taste of Jamaica Culinary Awards Ceremony, which took place this past Sunday, October 13, 2013 at The Montego Bay Convention Centre. The event, founded by JCDC and now operated by the Culinary Federation of Jamaica, is the premier event of its kind in Jamaica, drawing the local food industry’s biggest movers and shakers. If there was one evening to rub elbows with chefs, bartenders, service people, and everyone else in the culinary industry, Sunday night was the night.

The award ceremony was held in the Meeting Room Block of the Montego Bay Convention Centre, where approximately 1000 attendees witnessed the highlight of Taste of Jamaica. Entries were judged on a number of criteria including the quality of food and drink served, customer service, use of local produce and menus. The aspiring chefs and bartenders were assessed by an independent panel of food specialists.

Under the watchful eye of the Executive Chef, Randie Anderson and the Food and Beverage Manager, Andrew Cole, the Montego Bay Convention Centre walked away with awards in numerous categories. A very momentous victory went to Nicholas Stewart in the category of Junior Apprentice Chef of the Year. Nicholas is a student of the Spot Valley High School which was adopted by the Montego Bay Convention Centre in June of 2013. As a part of the program, Spot Valley High sends its students to the centre for training in the areas of Food and Beverage, Housekeeping, Security, Sales and Marketing. Doreth Chambers, Principal of Spot Valley High School, said, “Our school is indeed grateful to Montego Bay Convention Centre for this demonstration of kindness. We would also like to thank the company for recognizing the importance of education and how it affects the community.”

Nicholas Stewart has made the Spot Valley High School and the Montego Bay Convention Centre very proud with his achievement in the competition. As a result of this victory, Nicholas has won for himself an Associate Degree Scholarship at the Western Hospitality Institute.

Dittie Guise, General Manager of the Montego Bay Convention Centre said, “The Company’s vision and commitment to providing quality education is premised on the need to build a better future for the young generation of Jamaicans through quality education. Without a doubt, quality education offers children the best opportunity in life to realise their dreams and become the leaders of tomorrow. It is, therefore, in recognition of the importance of education and as part our Corporate Social Responsibility vision that we have committed to the adoption of Spot Valley High School.”

The other winners from the Montego Bay Convention Centre included:

• Clement Daley who received bronze medals in the categories of Bartending, Best Use of Beer and Best Use of Rum.

Taste of Jamaica also awarded the entrants in the Senior Team Competition a bronze medal, the only medal offered in this category. The team included Clement Daley, Margaret Lewis, Nadia Howlett, Youni Lyn, Rohan Porter, Okeen Clarke, and Jason Sams. This category allowed the team to show their cooking and waiter service skills. 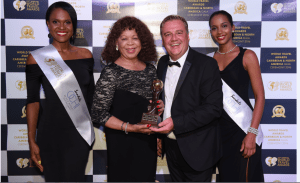 Montego Bay: Jamaica’s first cannabis seminar dedicated to shaping the future of the local cannabis market is confirmed to be held at the Montego Bay